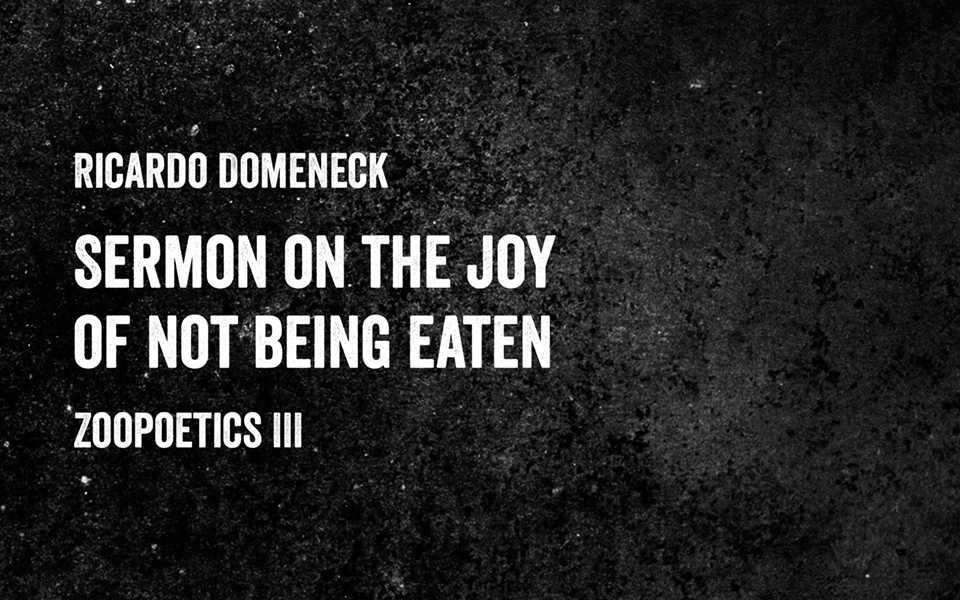 On two feet, you walked in here. What an achievement. Arched, you placed one foot after the other, a wonder of engineering, and saved so much energy acquired from the cows of slaughterhouses, energy saved by not dragging your knuckles and hands on the floor, like a chimpanzee. Your feet, you call them your own. Your achievement, you call it your own. Your hands, those fingers, ten weapons, now free from branches of trees, they reach into your pocket not for salt as salt once was the coin of exchange in a healthier time, they reach for your telephone, that charming way you profit every day from the technology invented and accumulated by those you’d now call primitive. Your five fingers. Unable to chip a stone. And it is with five fingers on each hand that bats now leave their caves and take to the skies. Five fingers hidden in fins, whales cross the Atlantic and the Pacific as we speak. Five fingers, no, ten, no, twenty, a crocodile now drags itself onto the riverbank and off the muddy waters. These dinosaurs. And the chicken, that feathered dinosaur. Become smaller, and survive. Become bigger, and don’t get eaten. Do not be devoured, that is the only lesson. Your life is tough? Try being a zebra in Africa. Try crossing the Mara river with hundreds of sisters and brothers and cousins pressing against you, pressing from behind, as if saying LEAP INTO THE WATERS LEAP INTO THE MOUTHS OF DINOSAURS.

The scapegoat. The goat that pays for others. The scapezebra. The boi-de-piranha. The piranha-cow. In Brazil, when the cattle ranchers roam the expanses of the highlands and cross rivers filled with piranhas, those toothed wonders of engineering – and why should we blame them for their teeth when we have our own? – when the cattle ranchers must cross rivers filled with piranhas, they first choose a sickly old one and send it into the waters, and while it distracts the toothed fish by being eaten (the entertainment! The entertainment wishing others be eaten, not you), while it distracts the piranhas by being eaten, the cattle ranchers cross the river upstream with the rest of the herd.

Because as Clarice Lispector has written, “Not being devoured is the most perfect of feelings. Not being devoured is the secret goal of an entire life. So long as she wasn’t being eaten, her bestial laughter was as delicate as joy is delicate”. The joy of not being eaten. We whose forefathers and foremothers so often were eaten. We too were prey. Prey for so long. Pray for all prey, you who once were prey too. What pride we now display in being apex predators, though some of us still get eaten by lions, killed by hippos and mauled by sharks, but not us, not us, safe on land, not just any land, but safe on European land, we are the ones who do not get eaten. Rejoice, you are on safe land, nobody gets eaten here. Here is the place for feasting. We sit around the table and feast. On other species. On any species.

What is it that awakens in us the need to be humans and not animals? Their bodies. The bodies of other species. So bodily. So corporeal. So body-only. So nothing-but-body. Their apparent inability to abstract. Our love for abstractions. We who say ANGEL to forget that we shit. We who say GOD to hide our piss. We who say LOVE to disguise the sperm being produced in your violent balls, oh dear male members of our adorable species, you are so dangerous and lovely, let me relieve you of your dangers. Praise our eggs, the eggs of our species, internal eggs of all females, an X in seach of an X, an X in search of a Y, XX, XY, XXY, while males rejoice in their abstractions, in their missiles, and keep all others locked in their animality. Lucky us, women, faggots, people of colour, we have escaped the white male straight escapes of abstraction. Let them fool themselves alone.

Do not deny what is animal in the animal and the human and the divine.

Do not deny what is human in the human, and the divine and the animal.

Do not deny what is divine in the divine and the animal and the human.

The peoples, the indigenous peoples of Brazil and other continents, before being invaded by the white-feathered white-furred Homo sapiens, claimed and continue to claim that all life is interconnected. They did not need the genetic research that now proves that all life forms share genetic material. The genes that make the bones of your arms and hands, your five-fingered joys, they also make the bones in the wings of birds and the fins of fish.

But there is a difference between them and us. The title of this event is I AM AN ANIMAL. We, having believed we left the animal kingdom, feel the need to reaffirm that we too are animals. But for the Amerindians, it is not a matter of us being animals, but that all other species are human, too. You are an animal when a dog sees you. A dog sees you as an animal and a dog sees another dog as a human being. You see the dog as an animal as you see another Homo sapiens as a human being. But the dogs see dogs as human beings and see you and your cat as animals. Your cat sees other cats as human beings and sees you and your dog as animals.

EVERYTHING THAT LIVES IS HUMAN. A hidden human in other clothes, clothes we call feather and fur. And there you are, with your fur, we who are as hairy as any of the apes, our hair being just finer, shorter, but there they are, your hair and fur distributed around your body as densely as in any ape.

But our mouths. Not the speaking mouths with their own brand of violence. But the mouth itself. Its existence. Its coming into being in a fish millions of years ago. The mouth. The eating of others. The eating of life for the continuation of life. Let us stop now and make ten seconds of silence for our sister zebra being eaten this exact moment on the plains of Africa.

And it is only one life being eaten for life, by life. No silence could honour everyone being eaten right now. This planet is wonderful. This planet is awful. Wonder and awe. Shock and awe. Because of mouths. Your mouth is the source of all violence. Our mouths are the mothers of murder. Wet your lips now. To reach them, your tongue had to pass over and between your teeth. Your jaws. There they are, your lips, which I am sure kiss so well, which I am sure suck so well, and right behind your lips, there you hide your teeth, which can tear flesh apart. Behind every kiss, the latent violence of teeth.

From the depths of Time, from the clouds of Extinction Heaven, from the Halls of Archeological Valhalla and the Hells of Taxonomic Oblivion, each single individual of the extinct human species looks at you right now and watches you lovingly, like a favourite though spoiled and mischievous grandchild, and wishes you good night, and the best of luck.

Performed on December 6th, 2017, at the event ‘I Am An Animal’, curated by Miriam Jakob and Felix Classen at West Germany, Kottbusser Tor, Berlin.