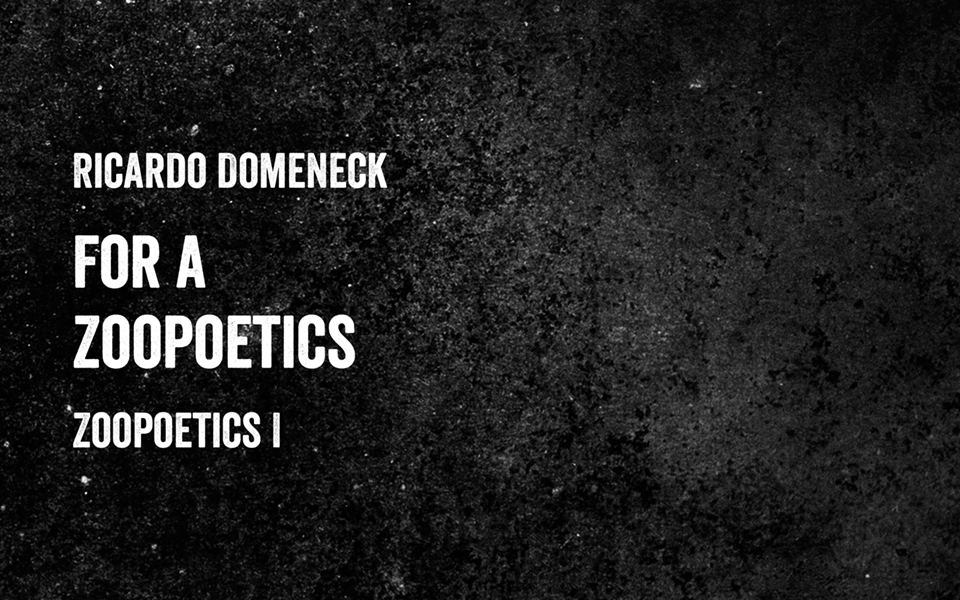 “I know the Butterfly — and the Lizard — and the Orchis.
Are not those your Countrymen?” (Emily Dickinson)

This has been one of my main interests in the past years: the research for a zoopoetics.

From obsessively reading about the evolution of our darling species in books such as ‘The Singing Neanderthals: The Origins of Music, Language, Mind, and Body’ by Steven Mithen, or the best-selling ‘Sapiens: A Brief History of Humankind’ by Yuval Noah Harari, to literary authors from the sprawling latitudes/longitudes who have dedicated their efforts to a comprehension of non-human consciousness.

Franz Kafka’s ‘A Report to an Academy’ („Ein Bericht für eine Akademie“, 1917) and Virginia Woolf’s ‘Flush: A Biography’. Ted Hughes and his poems as a ‘Crow’ (1970), or the so-called zoosemiotics of William Faulkner in ‘As I Lay Dying’ (1930). Zoopoetics has been described as “the process of discovering innovative breakthroughs in form through an attentiveness to another species‘ bodily poiesis.” Some of the most cited critical works on the subject are Jacques Derrida’s ‘The Animal that Therefore I Am’ (1997), and within the literary field itself, ‘Zoopoetics: Animals and the Making of Poetry’ by Aaron Moe.

The publication ‘Humanimalia: A Journal of Human/Animal Interface Studies’ is dedicated entirely to the subject.

In Brazil this has a particular interest and power for the conflation and conflict of an European anthropocentric view and the various Amerindian anthropomorphic perspectives, as studied by anthropologists Eduardo Viveiros de Castro and Tania Stolze Lima. The main book on the subject, ‘A Inconstância da Alma Selvagem’ (Viveiros de Castro, 2002), has been recently translated into German by Oliver Precht and released by publisher Turia + Kant as ,Die Unbeständigkeit der wilden Seele‘, and I can’t recommend it strongly enough.

It is very hard to summarize such a concept as “Amerindian perspectivism”, so I will refer here to a “general overview” from the Oxford Bibliography:

“Certain aspects of the concept of perspectivism, such as its essential difference to Western relativism, were present in a number of studies written by Viveiros de Castro’s students on hunting practices and shamanism among the Yudjá (Tupi-speaking people from the Xingu River, Amazonia). Nevertheless, the general outline of the concept and its theoretical consequences are elaborated in two of Viveiros de Castro’s most important articles (one being ‘Cosmological deixis and Amerindian perspectivism’ in the Journal of the Royal Anthropological Institute). To understand its contributions, it is necessary to begin by a general presentation of its mythological aspects. Amerindian myths take place at a time when the cosmos’ multiple entities shared a generic human condition and were thus able to communicate with each other. Myths often describe how, at some point, this condition suffers severe disruption, which results in the transformation of the numerous types of humans that existed—already differentiated by the physical or behavioral traits characteristic of the nonhuman beings they would later become—into the different present-day species of animals, as well as vegetables, artifacts, and other kinds of beings. While in the “first times” all beings were perceived as humans and nonhuman at the same time (or in a flux of constant transformation into one or another of these forms), myths tell how they permanently finally adopt the animal (or other) bodies they have today—a process that Viveiros de Castro describes in terms of the transition from intensive to extensive differentiation. However, shamanism and hunting reveal that this previous human condition was not entirely overcome, since animals, objects, and spirits can still reveal an inner human form, usually associated with (what is commonly translated as) their ‘soul’ or ‘double’. External nonhuman appearance is thus usually conceived as skin or clothing that hides a human interior. This body or skin is responsible for determining a specific point of view. Rather than an opposition between internal human essence and external nonhuman appearance, these cosmologies postulate a radical relationalism: While viewed by humans as animals, animals and other beings view themselves as humans and live in conditions similar to humans; that is, they have a social life similar to those who inhabit an Amerindian village. In some cases they may view humans as enemies, while in others they may perceive humans as animal predators, most commonly as jaguars. Humanity is thus the reflexive condition of a subject to itself, while animality is the condition of the body regarded from an external point of view. This ontological shift is condensed in the contrast between multinaturalism (different corporeal states that presupposes a similar human and cultural condition) and multiculturalism (the same and common nature or reality, regarded by different cultural points of view). Multinaturalism entails a relationalism (which is perspectivism), while multiculturalism entails a relativism (that must not be mistaken for perspectivism).”

In the literary field in Brazil, this has been studied by Maria Esther Maciel, citing a few of the Brazilian writers who have dedicated texts to non-human consciousness, such as poet Carlos Drummond de Andrade and his “An Ox Looks At Men” or Clarice Lispector’s many texts dedicated to chickens and cockroaches. The indigenous beliefs on metamorphosis and shamanism have appeared most strongly in João Guimarães Rosa, especially his text ‘Meu Tio o Iaueretê’, translated into German by Curt Meyer-Clason as ,Mein Onkel der Jaguar‘. I may return to this, but for now I end with the poem by Carlos Drummond de Andrade, in English translation by Mark Strand.

An Ox Looks At Man

They are more delicate even than shrubs and they run and run
from one side to the other, always forgetting
something. Surely they lack
I don’t know what basic ingredient, though they present
themselves as noble or serious, at times. Oh, terribly serious,
even tragic. Poor things, one would say that they hear
neither the song of the air nor the secrets of hay;
likewise they seem not to see what is visible
and common to each of us, in space. And they are sad,
and in the wake of sadness they come to cruelty.
All their expression lives in their eyes — and loses itself
to a simple lowering of lids, to a shadow.
And since there is little of the mountain about them —
nothing in the hair or in the terribly fragile limbs
but coldness and secrecy — it is impossible for them
to settle themselves into forms that are calm,
lasting and necessary. They have, perhaps,
a kind of melancholy grace (one minute) and with this they allow
themselves to forget the problems and translucent
inner emptiness that make them so poor and so lacking
when it comes to uttering silly and painful sounds: desire, love, jealousy
(what do we know?) — sounds that scatter and fall in the field
like troubled stones and burn the herbs and the water,
and after this it is hard to keep chewing away at our truth.

(translated from the Portuguese by Mark Strand)