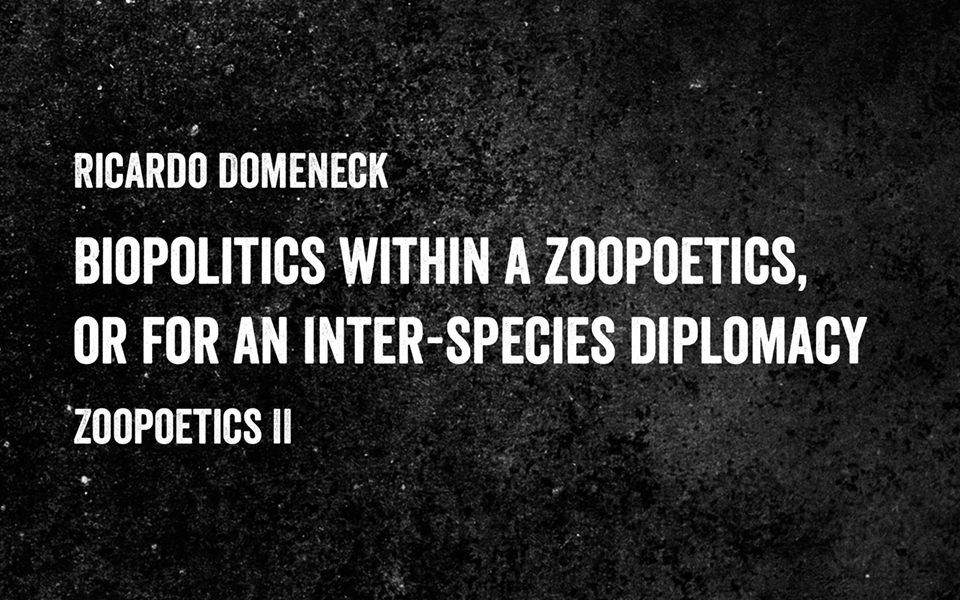 In December 2016 while in Amsterdam, I visited the Rijksmuseum for an exhibition of newly-discovered works by Frans Post (1612-1680), the Dutch painter who traveled to the Brazilian territory under control of the Dutch after their invasion of 1630 and onwards, brought by the German prince Johann Moritz von Nassau-Siegen (1604-1679), known as “the Brazilian” for his role as governor of Dutch Brazil. It was a short period, their settlement, though the area under domination by the Dutch Republic extended to almost half of Brazil’s settled European area at the time, with their capital in Recife.Frans Post was one of the artists commissioned to paint some of the first landscapes in the country, and possibly the best alongisde Albert Eckhout (1610-1665). But they not only painted the landscape, the species and the cities they built, but embued with that typical European curiosity, though so childish and arrogant, they hunted and stuffed several members of different species as models for painters and for the education of the Dutch public. And it was thus that one entered the Rijksmuseum first room dedicated to Frans Post’s work, and was not only faced with his painting “View of the São Francisco River with capybara in the foreground” (1639), but also a capybara herself, dead and stuffed, hunted in those years, a seventeenth century capybara which might have swum in those very waters of the São Francisco River, as mythical and literary as the Rhine is for the contemporary Germanic tribes. 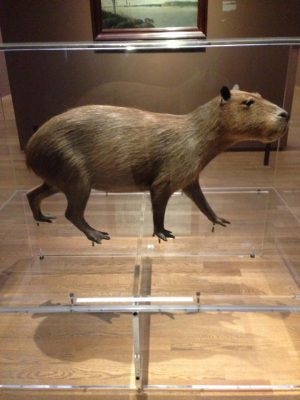 I must now be very careful in how I should proceed, what vocabulary to use, lest my dear European readers roll their eyes at the uncouth mystical Southerner daring to address them. Let us say I experienced a near vertigo looking at that stuffed capybara, once alive, and had to leave the room for a while. I had already been steeped into the work of Brazilian writers such as Eduardo Viveiros de Castro and Clarice Lispector, or foreign thinkers such as Bruno Latour, and maybe the knots of humanism had finally begun to loosen, for I believe it was the first time that such a proud display of violence struck me as so utterly obscene. 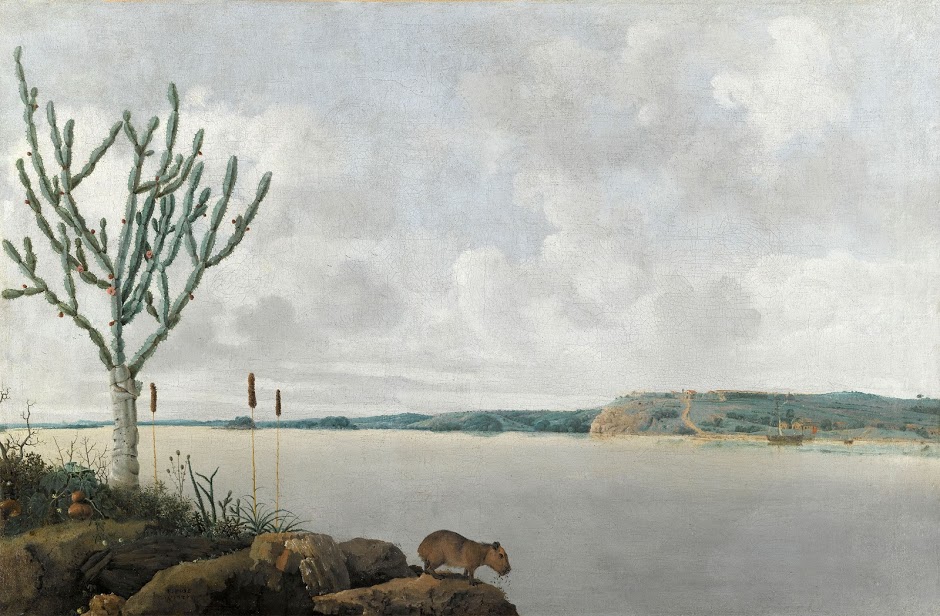 I grew up surrounded by animals. As any house in the “interior cities” in Brazil, we had a large backyard. Every family grew at least one fruit-bearing tree, and there was a custom to share your variety of fruits with your neighbors. We first had a guava tree (Psidium guajava), which later was felled by a storm and replaced by an acerola tree (Malpighia glabra). My mother called the house a zoo, not only because of the five young Homo sapiens who behaved appropriately like primates, but for all the other species in the backyard. At its peak, there lived two dogs (Canis familiaris), two cats (Felis catus), two red-footed tortoises (Chelonoidis carbonarius), one terrapin (Phrynops hilarii), six guinea pigs (Cavia porcellus), two rabbits (Oryctolagus cuniculus), ten collared-doves (Streptopelia decaocto), approximately twenty budgerigars (Melopsittacus undulatus), and finally one great kiskadee (Pitangus sulphuratus), which I rescued as a chick and nursed to adulthood. After we released it, for months it returned to our backyard to eat the papaya we’d leave out for him.

We call the great kiskadee a „bem-te-vi“ in Brazil, because its singing seems to mimick the Portuguese phrase „I saw you clearly“, and which was my favorite bird song (it said something! it said something in our language!), second only to the singing of the scaled dove (Columbina squammata), which we call „fogo-apagou“ in Brazil, believing it also speaks Portuguese and goes around telling everyone, „the fire is out! the fire is out!“ 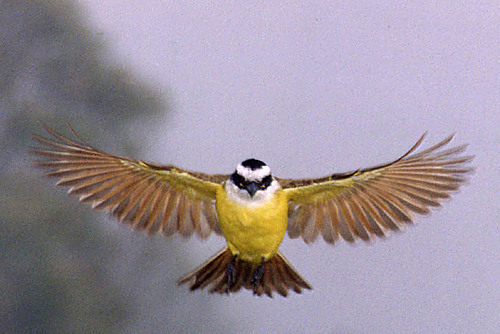 I was a very inquisitive child, whose interests ranged from science to religion, but mostly it was language. It would be a romantic idea now to trace back my interest to those mornings in my mother’s bed, listening to the “bem-te-vi” and the “fogo-apagou” sing, fascinated that they might say something I could understand. However, nature poetry is something that fell in near disgrace with the cosmopolitan and urban aspirations of Modernist poets. Though Seamus Heaney would go on to win the Nobel Prize, localist poets in love with specific landscapes remained marginal in Modern poetry, such as Antonio Machado in Spain or Umberto Saba in Italy. In my anthology released by Verlagshaus Berlin, this would become the opening poem:

As an inquisitive child, I remember wondering why our two dogs and two cats were given names, but all the rest were supposed to remain anonymous within the headings of their species. Given names, it seemed the dogs and cats were priviliged to the sense of nearly being no animals anymore, but members of the household. A name makes you an individual. A name is a privilege. Does the Bible not say the chosen ones will one day be told their real name, a name which will then be known only by him or her and God?When I delivered the first text, Jo Frank asked me what the relationship between a zoopoetics and contemporary literary output might look like. In my natural inability to separate realms such as life and art, literature and society, or as I am trying to learn in Amerindian perspectivism – nature and culture, this has been a development of my trying to rid myself of typical Eurocentric dualities, this “humanist” failure that Europe has so joyfully exported to all the countries she… let’s say… visited. In ‚War of the Worlds: What about Peace?‘, in the chapter “The false peace offered by the one nature/many cultures divide”, Bruno Latour writes:

“The word ‚war‘ is spewing out of every mouth, and although it sounds so disheartening at first there might be an opportunity to seize on these clarion calls. In ‚emergency‘ lays a hidden word, ‚emergent.‘ What is emerging, being ‚brought to light,‘ by the recent events? To realize that we are in the midst of a war might take us out of the complacency with which so many people imagined an ever more peaceful future, with all the nations converging toward fuzzy modernist ideals. No, Westerners might not be able to modernize the whole planet after all. This does not mean that they are forever locked into the narrow confines of their own civilization, threatened by all others in a war of all against all. It just means that they counted a bit prematurely on possessing a sure principle that could unify the whole world, make one accepted common world. It is not the case that an already existing peaceful union has been savagely shattered. We have merely been reminded that unity has to be made; it is not simply observed. Far from being self evident, unity was never more solid than a future possibility to struggle for. Unity has to be the end result of a diplomatic effort; it can’t be its uncontroversial starting point.”

If we are experiencing or finally becoming aware of a war of all against all, not only Americans against Arabs, Christians against Muslims, but even of Humans against Homo Sapiens, and Homo sapiens against all other species, can poetry play an inter-species diplomatic and political role in our Western societies, much as shamans still play in so many other societies today?

I close this text with another quote from Eduardo Viveiros de Castro:

„In the Greater Antilles, some years after the discovery of America, whilst the Spanish were dispatching inquisitional commissions to investigate whether the natives had a soul or not, these very natives were busy drowning the white people they had captured in order to find out, after lengthy observation, whether or not the corpses were subject to putrefaction. The general point of this parable (from which Claude Lévi-Strauss derived the famous moral: ‚The barbarian is first and foremost the man who believes in barbarism‘) is quite simple: the Indians, like the European invaders, considered that only the group to which they belong incarnates humanity; strangers are on the other side of the border which separates humans from animals and spirits, culture from nature and supernature. As matrix and condition for the existence of ethnocentrism, the nature/culture opposition appears to be a universal of social apperception. At the time when Lévi-Strauss was writing these lines, the strategy of vindicating the full humanity of savages was to demonstrate that they made the same distinctions as we do: the proof that they were true humans is that they considered that they alone were the true humans. Like us, they distinguished culture from nature and they too believed that Naturvolker are always the others. The universality of the cultural distinction between Nature and Culture bore witness to the universality of culture as human nature. In sum, the answer to the question of the Spanish investigators (which can be read as a sixteenth-century version of the ‚problem of other minds‘) was positive: savages do have souls. Now, everything has changed. The savages are no longer ethnocentric but rather cosmocentric; instead of having to prove that they are humans because they distinguish themselves from animals, we now have to recognize how inhuman we are for opposing humans to animals in a way they never did: for them nature and culture are part of the same sociocosmic field. Not only would Amerindians put a wide berth between themselves and the Great Cartesian Divide which separated humanity from animality, but their views anticipate the fundamental lessons of ecology which we are only now in a position to assimilate.“